When Dr. Cyrus Mills returned home after inheriting his estranged father's veterinary practice, The Bedside Manor for Sick Animals, the last thing he wanted was to stay in Eden Falls, Vermont, a moment longer than absolutely necessary. However, the previously reclusive veterinarian pathologist quickly found that he actually enjoyed treating animals and getting to know the eccentric residents of the tiny provincial town-especially an alluring waitress named Amy.

So Cyrus is now determined to make Bedside Manor thrive. Not an easy goal, given that Healthy Paws, the national veterinary chain across town, will stop at nothing to crush its mom-and-pop competitor. And the rival vet practice isn't Cyrus's only competition; a handsome stranger shows up out of nowhere who clearly has a mysterious past with Amy. To top it off, Cyrus finds himself both the guardian of a very unique orphaned dog and smack in the middle of serious small town drama.

This charming sequel to The Patron Saint of Lost Dogs is a wild and delightful ride through one jam- packed week, where Cyrus must figure out how to outsmart the evil veterinary conglomerate, win back Amy's heart, solve several tricky veterinary cases, find a home for an orphaned dog, and detangle himself from an absurd case of mistaken identity. DOG GONE, BACK SOON brims with Nick Trout's trademark humor, charm, and captivating animal stories, and is proof that all dogs, lost or not, on four feet or two, deserve a second chance

Okay so I really liked this book, much to my surprise. It’s definitely not my usual genre, being that it was a book about a nerdy, awkward vet. But this book had me laughing out loud and falling in love with the characters, those on two legs and four!

Dog Gone, Back Soon is the sequel to The Patron Saint of Lost Dogs by Nick Trout (FYI: I had not read book one when I started book two and it didn’t hurt my ability to comprehend the plot) and picks up right where book one left off. Dr. Mills has just had a horrendous first date with the cute waitress Amy. He is berating himself (lots of inner monologue) for his reaction to his date taking a phone call when he arrives back at Bedside Manor, the veterinary clinic he inherited from his estranged father. A patient is waiting for him and he snaps himself back to work mode. Dr. Mills must find a way to save his clinic before he starts losing patients to the new, fancy clinic Healthy Paws in a neighboring town, diagnose three difficult patients, and salvage his budding relationship with Amy.

I loved the characters of this book! Dr. Cyrus Mills is mid-thirties and used to working as a veterinary pathologist (dead animals) so taking over his father’s practice has proven to be a challenge for him. He cracks me up when he is reminding himself on the inside to speak normal and don’t react badly when on the outside he is so awkward (I’m talking like Leonard and Sheldon from the Big Bang Theory awkward). Very introverted and not use to speaking to people!

Unbelieveable. I’m supposed to be dealing with patients who can’t (or won’t) tell me where it hurts. Instead I spend just as much time helping those on two legs as I do those on four. -Dr. Cyrus Mills

I loved all the characters really! Dr. Lewis is the older vet working with Cyrus, kind of a father figure, always offering unwanted sage advice. Then there’s the receptionist Doris who I haven’t decided if I like or not, she’s the town gossip. And then of course Amy, high-spirited, speaks her mind the complete opposite of Cyrus. And who can forget the parade of unusually sick animals: Ermintude the Jersey Cow, Marmalade the fat cat, Gilligan the neurotic collie, and Henry the devil cat! Not to mention my favorite Stash the doodle (labradoodle): 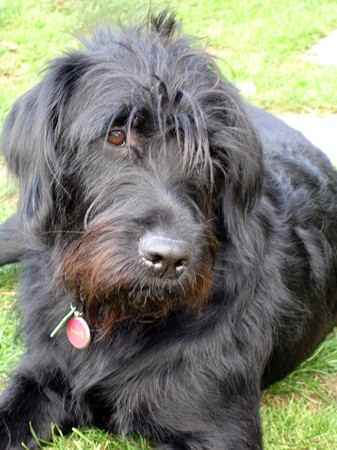 The story line was just okay for me. The characters were well-developed with distinct personalities, but the storyline felt more like an episode of a TV sitcom. The book is broken up by days of the week, and each chapter kind of has it’s own little theme as Cyrus deals with a particular case or situation that comes up between him and Amy or him and Dorkin (the manager of Healthy Paws). There was no build-up to a climax just one calamity after another (be it with his patients or his own problems).

Would I recommend this book? Yeah! I enjoyed it, it’s not a deep read but kind of a fluff, feel-good kind of read. If you are looking for lots of laughs and a book you can sit down and just escape for a few hours, then this is a book you should pick up. Also if you are an animal lover, there’s plenty of animal humor in this book!

Nick Trout is a staff surgeon at the prestigious Angell Animal Medical Center in Boston. He is the author of the New York Times bestseller Tell Me Where It Hurts, Love Is the Best Medicine, Ever By My Side, and The Patron Saint of Lost Dogs, and is a contributing columnist for The Bark magazine. He lives in Massachusetts with his wife, Kathy, and their adopted labradoodle, Thai.

Mini-Review: A Thousand Pieces of You by Claudia Gray
Waiting on Wednesday #17 – Court of Fives by Kate Elliott

Review: Gates of Thread and Stone by Lori M. Lee

Weekend Reads #114 – The First Kiss of Spring by Emily March

2 responses to “Dog Gone, Back Soon by Nick Trout”