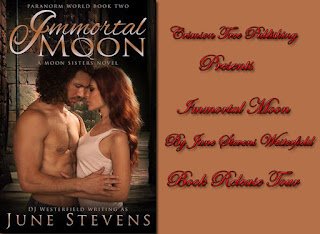 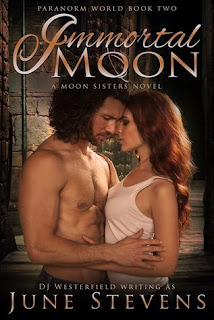 Anya Moon only has one personal rule: Don’t date vampires. She never dreamed the price for breaking it could be her life.
In his five hundred years as an assassin, Jarrett Campbell has never gone beyond a one-night stand with a woman. As a vampire, he knows a lasting relationship with a Norm is out of the question. But Anya Moon is just too intriguing to pass up. A two-week fling can’t hurt as long as they both know how it will end… right?
Caught up in a romance he never expected, Jarrett forgets that his life as an assassin is never safe… especially when one of his past targets returns from the dead. Now he is in a race against time to save Anya, but is her life worth his death?
Excerpt:

They walked back to the pub at a fast clip, not speaking. When they arrived, Jarrett followed Fiona up to the rooftop garden.
The moment they were alone, Fiona rounded on him. “I never took you to be a moron, Campbell. I can’t even imagine what would be so important to make you blow an undercover op like that.”

“What’s going on? What’s all the shouting about?” Anya asked as she ran onto the roof.

“Your boyfriend is a flipping idiot,” Fiona yelled.

Jarrett and Anya sputtered at the same time, but Fiona held up her hand impatiently.

Anya narrowed her eyes at her sister. “Because you two came running through the pub like a bat out of hell and there is blood on your arm. I thought you might need help.”Her voice level rivaled her sister’s.

Fiona glanced down at her arm, and then back at Anya, her face and voice softer. “Sorry, An. It’s just a small cut. I’m a little pissed at Jarrett right now, and I just need to yell at him for a bit. I came up here so we wouldn’t wake River.”

“If you don’t take it down a notch you’re going to wake up the whole damned city,” Anya retorted and tossed Fiona the towel in her hand. “Here, you can clean up your arm with that. What are you yelling at him about? Is it personal or work related? Do I need to stay and take sides?”

Jarrett nearly laughed out loud. Anya was actually contemplating taking sides in an argument between him and Fiona. He wondered if she would take his side against her sister. Of course he knew he was in the wrong this time, but would she back him up if she thought he was right?

“I totally screwed up. I deserve whatever she dishes out,” Jarrett said before he realized what he was doing.

Anya and Fiona just stared at him a long minute, then Anya walked over and pulled him down into a kiss. It was a quick, sweet kiss, but it made him burn to his toes.

“I like it when a man admits he’s wrong,” she said. Then she turned back to Fiona. “Okay, you can kick his ass now, but try not to break him. I have plans later.”

“Wow, you just turned fucking up into a ploy to get into my sister’s pants. That takes skill, my friend,” Fiona said when the roof door swung shut behind Anya. 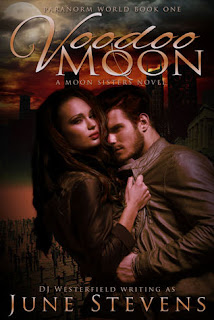 A sinister magic is sweeping across Nash City…
To Fiona Moon, it’s just another day at work. And some days, well, they’re a helluva lot worse than others. As a member of the elite Black Blade Guard, Fiona is tasked with hunting down the most-dangerous Paranorm criminals. To find out who is kidnapping mages and sucking the life energy from their bodies, she has to work with the one man that embodies everything she despises.
Master Necromancer Ian Barroes, a rich professor of Necromantic Studies, wants only one thing in this world… Fiona.
They each hold secrets that could destroy them, but ones that could also be the key to destroying the evil Voodoo priest, Bokor. They must learn to trust each other and track down Bokor before more innocent lives are lost. When Fiona becomes a target of the evil madman, she is lured into his trap. Now, she and Ian have to fight for survival…and their very souls. 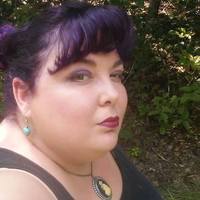 June is a geek girl, fat chick, and unrepentant romantic. She writes full time and is both independently and traditionally published. She writes in several romance genres including paranormal/urban fantasy, suspense, fantasy, sci-fi, and contemporary romance. She also works
part time running her greeting card company.
When not working, June can be found making jewelry, reading, cooking, or watching geeky movies with her husband and snuggling with her 6…YES 6, furbabies. Notice cleaning wasn’t listed…
June currently writes as both June Stevens and June Stevens Westerfield due to a name mix-up with another author named June Stevens. Eventually you will be able to find all of her books by searching June Stevens Westerfield.

Review: From Blood and Ash by Jennifer L. Armentrout
Release Blitz: King of the Friend Zone by Sherilyn Pratt