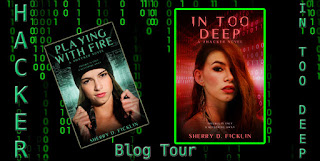 Clean Teen Publishing is excited to bring you In Too Deep, the second book in the #Hacker Series by Sherry D. Ficklin.

One talented hacker.
One dead body.
One explosive secret.

When one reckless night leads Farris Barnett to the dead body of a classmate, she's as willing as everyone else to write it off as a suicide. That is, until cryptic messages start coming in from someone who knows the truth, and they want Farris on the case. Putting her hacker skills to work, she begins to unravel the life of a victim who might just have been the guiltiest of them all.

Her personal life in turmoil, Farris turns to the only person she can trust to help her get to the bottom of things—a friend on the verge of becoming much more. Together, they confront a killer with a secret not even she could have decoded.

The biggest bombs, the ones that do the most damage, are the ones you never see coming.

I release his hand a moment before we hit the water, the icy cold waves like shattered glass as I drive through the surface feet-first. Every inch of my skin stings on impact, the oxygen pushed from my lungs. Below the surface, I feel a wave roll over me, the tide dragging me toward the shore.

Kicking my legs, I finally surface, sucking in a deep breath just before another wave crashes over me, threatening to take me back under. It’s only luck that allows me to bob above the water, wiping the hair back from my face. I open my eyes. A few feet away, I see Cole break the surface, gasping for air. Whipping around, he searches for me in the darkness. Catching sight of me, he laughs, cupping his hand and dragging it across the water, sending a spray at my face.

I splash him back, feeling giddy as the adrenaline floods my system. It’s a dizzy, relieved high, sort of like the feeling you get at the end of a roller coaster ride. Part of me is just glad to be alive, the other much braver part cheers to do it again. Just then, a familiar tug grabs me as the tide begins to pull me back out to sea. With a jerk of my head, I turn and swim for shore, checking to make sure Cole is following.

As soon as I feel the sand under my feet, I stand up and begin walking to the shore. Within minutes, Cole is beside me, wringing the water out of his black T-shirt.

Every step is labored, the waves pushing and pulling against my legs. My denim shorts and pale green tank top are soaked and heavy. Even the wind blowing across my bare arms hurts as we hike onto the shore and collapse to our knees, laughing.

I roll onto my back, too elated to care about the sand sticking all over me. The moon is just rising on the horizon, huge and full, its light bouncing off the choppy surface of the water.

We sit there like that for a few minutes, just enjoying the rush of adrenaline and the sound of the waves fracturing against the sand. Finally, he breaks the silence.

“What’s that?” he asks, jerking his head down the beach.

I roll over, squinting against the darkness. A huge lump of something has rolled up on shore a few yards down from us. My first thought is that it looks like a black trash bag. Then I see something else, something that looks a lot like a hand.

“I think that’s a person,” I say, climbing to my feet.

Cole is already upright, jogging toward them. As soon as he gets there, he stops, dropping to his knees and reaching out. I follow behind. The closer I get, the more the crumpled body comes into focus. Cole rolls him onto his back and puts two fingers on his neck, checking for a pulse.

There’s no point, really. His face is waxen and swollen, his eyes wide and milky white, staring up at nothingness. His blue lips are parted, white sea foam bubbling from his mouth. The face is familiar; it’s a boy from our school. Not someone I know well, but someone I’ve seen around enough to recognize.

Cole clasps his palms against Mac’s chest and starts doing compressions, but I put a hand on his shoulder, stopping him. It’s too late. Much too late.

One brilliant young hacker.
One experimental government aircraft.
One chance to keep it all from going up in flames.

Still recovering from her troubled past, Farris is no stranger to change. But when the military transfers her father across the country to an experimental aircraft squadron, settling in to a new life is the least of her problems. As a series of apparent computer glitches threaten the security of the fleet and the blame falls on her father, she decides to put her computer skills to use digging up the truth. Soon she’s drawn into the perilous world of a hacker who is determined to ground the fleet—at any cost.

When all signs lead to someone close to her as the mastermind, Farris will have to burn more than bridges to get to the truth. She will have to risk her fragile new life to uncover the identity of the cyber criminal before they can escalate from harmless tampering… to all out murder.

Sherry is a full time writer from Colorado and the author of over a dozen novels for teens and young adults including the best selling Stolen Empire series. She can often be found browsing her local bookstore with a large white hot chocolate in one hand and a towering stack of books in the other. That is, unless she's on deadline at which time she, like the Loch Ness monster, is only seen in blurry photographs.
Sherry also writes New Adult fiction under the pen name Ranae Glass and is a contributing writer for fangirlish.com.

One response to “Spotlight: In Too Deep by Sherry D. Ficklin”