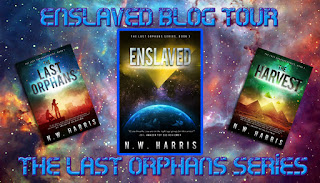 If he loses her, he’ll lose his will to fight.

Shane and his friends survive the first major attack against the enemy, destroying the alien ships that came to harvest the children of Earth and turn them all into slaves. However, one ship escaped, and the aliens have captured Kelly. Shane will do whatever it takes to save her, but turning his back on his friends could jeopardize the whole mission.

The enemy invades Kelly’s mind, turning her into a slave soldier. She’ll follow their orders, even if it means murdering her friends, including her little sister and Shane. She is helpless, trapped inside her body while it performs heinous tasks under the direction of her new masters, while her sanity and desire to live fade.

Shane returns home to make a rescue attempt, only to find Kelly commanding an army of human slave soldiers, and she’s determined to make him join her ranks. Will Shane save Kelly before she gets to her sister, or will she help the enemy enslave the rest of humanity?

Over his shoulder, he saw Tracy behind him, followed by Steve, Lily and Dr. Blain—not enough people to put up much of a fight against all the crazies sweeping by on the streets above.

A door creaked open on his left, and dim yellow light cut a wedge through the shadows. Under a solitary bulb hanging from the ceiling of the small room, a woman with short, blonde hair slumped against ropes that tied her chest, arms, and legs to an old metal chair. Her features were perfect, too perfect like Lily’s, though her skin was not as tan. She wore grimy and loose clothing, an old T-shirt, and some baggy sweatpants, but Shane knew in an instant that she was Anunnaki. He paused, fixated on her. She returned his gaze, her honey-brown eyes piercing, seeming to glow brighter than the light hanging overhead.

“Shane?” Her eyes widened. In them, he saw fear. Her voice sounded familiar.

One of Jones’ clones stepped into the doorway, blocking his view.

“Gag her,” Lily ordered. “And keep it quiet down here.”

The clone nodded and backed into the room, closing the door before Shane had a chance to see the alien again. There was too much noise coming from above—terrified screams and the sounds of gunshots—to ask questions, but he suspected she was the alien who was in the escape pod with him. It seemed like it was from a dream he’d had years ago, but he recalled she’d said her name was Hanne. Dr. Blain must’ve patched her up. Now he reckoned they’d extract all the information they could from her, leaving one more oxidized bloodstain on the floors of this forsaken basement. It shouldn’t bother him—she was the enemy—but it did.

One horrifying day will change the life of sixteen-year-old Shane Tucker and every other kid in the world.

In a span of mere hours, the entire adult population is decimated, leaving their children behind to fend for themselves and deal with the horrific aftermath of the freak occurrence. As one of the newly made elders in his small town, Shane finds himself taking on the role of caretaker for a large group of juvenile survivors. One who just happens to be Kelly Douglas—an out-of-his-league classmate—who, on any other day, would have never given Shane a second glance.

Together, they begin their quest to find out why all of the adults were slaughtered. What they find is even more horrifying than anything they could have expected—the annihilation of the adults was only the beginning. Shane and his friends are not the unlucky survivors left to inherit this new, messed-up planet. No, they are its next victims. There is an unknown power out there, and it won’t stop until every person in the world is dead.

A spine-tingling adventure that will have you gasping for breath all the way until the last page, The Last Orphans is the first book in an all-new apocalyptic series.

The Harvest (The Last Orphans, #2)

In the wake of the apocalypse, nobody is safe.

Shane Tucker and his friends thought they managed to save the world from the destructive machine that killed off most of its adult population. Unfortunately, a war nobody was prepared for has only just begun. Now they find themselves joining ranks with a secret organization that will train them to fight for the right to survive. Taking refuge alongside other teenage survivors in a hidden base set deep within the mountains, they will learn how to repel an imminent attack by an ancient race of aliens.

Determined to safeguard the children under their charge, Shane and his friends compete for the ultimate prize—a suicide mission against the flagship of the alien fleet. While Shane's feelings for Kelly deepen, along with his need to protect her, he finds emotions clouding his judgment. He’ll gladly die for her. But he refuses to die with her. No amount of training can prepare them for what is to come. Everything the brave teenagers have endured thus far will be eclipsed, with the freedom of humanity hanging in the balance.

The Harvest is the heart-pumping sequel to The Last Orphans by N.W. Harris.

Born at the end of the Vietnam war and raised on a horse farm near small town north Georgia, N.W. Harris's imagination evolved under the swaying pines surrounding his family’s log home. On summer days that were too hot, winter days that were too cold, and every night into the wee morning hours, he read books.

N.W. Harris published his first novel—Joshua's Tree—in 2013. It was no wonder that with his wild imagination and passion for all things word related, that N.W. Harris was named a quarter finalist in Amazon's Break Through Novel Award Contest. In early 2014, N.W. Harris joined the ranks with Clean Teen Publishing when they signed his new young adult apocalyptic adventure series—The Last Orphans.

In addition to writing, N.W. Harris has been a submarine sailor, nurse, and business owner. His studies have included biology, anthropology, and medicine at UCSB and SUNY Buffalo. He is an active member of SCBWI and lives in sunny southern California with his beautiful wife and two perfect children. He writes like he reads, constantly.

Review: The Elements of the Crown by Kay L. Moody