Heartless by Kelly Martin
Series: Heartless,
Published by Self Publish on 2016-01-17
Length: 368 pages

Who is really the monster?

For thirteen years, Gracen Sullivan dreamed about a red-eyed demon named Hart Blackwell who tortured her every night. Her mother freaked when she found out about her daughter's "hallucinations" and forced Gracen to go to the doctor, who prescribed some very powerful medication which kept Hart out of her head for five years.

A week ago, Hart came back and brought a friend.

But something has changed, and Gracen is seeing Hart when she's awake too. And the other "friends" in her dreams? They have been found dead.

The police want to talk to her.

Her boyfriend has become distant.

Her dreams are becoming more and more intense.

Heaven has to stop her.

When push comes shoving, can Gracen fight the evil eating away inside her or will she be forced to embrace it and destroy the world? 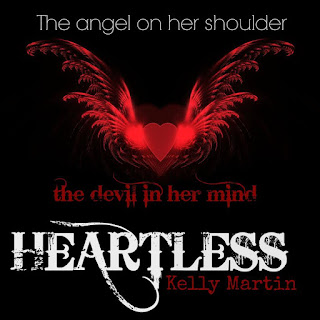 Kelly Martin writes paranormal, contemporary, historical, and YA fiction. She has been married for over ten years and has three rowdy, angelic daughters. When she's not writing, she loves taking picture of abandoned houses, watching horror gamers on YouTube-- even though she's a huge wimp-- and drinking decaf white chocolate mochas. She's a total fangirl, loves the 80s and 90s, and has a sad addiction to paranormal TV shows. {Basically, she likes creepy stuff.} Her favorite characters are the very flawed 'good guys'--and 'bad guys' who don't know they are evil. She loves giving her readers books with unexpected twists and turns, but (here's a hint) most of her books have the ending spelled out in the first chapter. See if you can figure it out.

If you ever have a question or comment, feel free to email her at kellymartin215 @ yahoo . com ♥ You can follow her writing adventure at www.kellymartinbooks.com 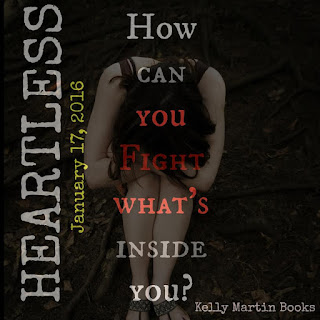 Part of me is afraid I’m going crazy.

Part of me is scared I’m not, because if I’m not, if what is going on in my nightmares is real, then I’ve got 99 more problems to deal with.

That’s why I can’t tell Tina. It’s why I can’t tell anybody. There is something inside me that will not allow me to have a meaningful conversation with people. It’s like part of me is missing. Not just the scary part either. It’s like I’m missing some important part of myself that everybody else has and God forgot to put inside me. Like everyone else has a nice awesome soul and I have… Hart.

So not a fair trade.

I sit up straighter and place my hands on the keyboard, ready to tell Tina something without telling her anything at all. It’s how humans communicate, right? I’ll tell her that, yeah, I’m having some anxiety issues. It’s the second full week of college, of living with Sam, of being away from home. College assignments are different from high school, and I’m a little stressed about doing well on them. I won’t tell her about Sam or the weird fight we had last night. Almost like he wanted to pick it so I’d go upstairs and leave him alone. I’ll tell her it’s anxiety and not that I haven’t slept more than two hours a night in a week. I’ll tell her a lot of things because she is my friend and that’s what friends do.

@tinaM Tell me about it! Mondays are so hard! Gotta go. Talk to you later. Have a great day!

And then I add some smiley emoticons, because that’s just what a person does. I hit send and lean back in my computer chair. Monday morning. Time for Professor Mitchell’s class. Time to see Marcy, AKA the best Teacher’s Assistant in the world, and listen to the professor talk about some random event that happened in the Civil War. Because that’s what he does. He talks about random events that didn’t matter to anybody but does it in such a way that you care. Professor Mitchell is one of those teachers who just makes you want to learn, makes you want to listen. He has something special about him. Something no other teacher has had, and I’ve only had him three times. I have his class Monday, Tuesday, and Thursday. A great way to start the week, and a great way to end it.

Sweet, intelligent, awesome, and at least twenty years older than me. Handsome in that old guy way. Not that I’d want anything to do with him—not in that way. Not feelin’ that, but I know some other people in the class wouldn’t mind.

The professor loves talking about the Civil War. More than just the war, the families involved, the real people behind the “Hollywood machine,” as he calls it.

I shut down my computer and stretch in my chair. Yeah, it’s Monday, but it’ll be a good Monday. It will. I’ll go to class with a positive attitude. I’ll listen. I’ll take notes. I’ll text Sam—funny how he’s not sent me one before now—and I’ll be happy.

Or, at the very least, I’ll pretend to be happy.

Sunshine. Marcy, the T.A. for Professor Mitchell. Tina. Sam—somewhere. I’m living my life. I’m moving on. I’m totally ignoring Hart, who is currently whispering in my head about candles. 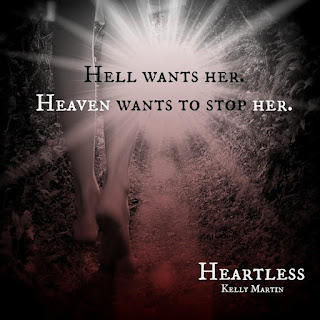 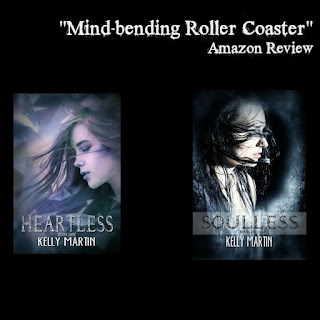 Review: Roman and the Hopeless Romantic by Michelle MacQueen

Review: After by S.K. Gregory

One response to “Book Blitz: Heartless by Kelly Martin”