Happy Wednesday y’all! Today I’m eagerly waiting on Seasparrow by Kristin Cashore, the fifth book in the Graceling Realm series. This is one of my all-time favorite fantasies. I’m so excited to return to the world, and this time get Hava’s perspective. She’s a fun character already, and I’m curious to know more about her. Plus, just LOOK at that cover *drools* 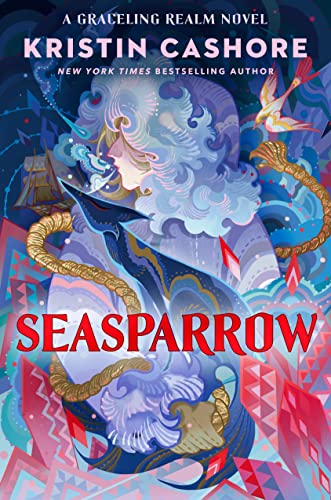 The fifth novel in the bestselling Graceling Realm series is told from the point of view of Hava, Queen Bitterblue’s sister and spy, and chronicles the harrowing journey back to Monsea.

Hava sails across the sea toward Monsea with her sister, the royal entourage, and the world’s only copies of the formulas for the zilfium weapon she saved at the end of Winterkeep. During the crossing, Hava makes an unexpected discovery about one of the ship’s crew, but before she can unravel the mystery, storms drive their ship off course, wrecking them in the ice far north of the Royal Continent. The survivors must endure a harrowing trek across the ice to make it back to Monsea. And while Queen Bitterblue grapples with how to carry the responsibility of a weapon that will change the world, Hava has a few more mysteries to solve —and a decision to make about who she wants to be in the new world Bitterblue will build.

Kristin Cashore grew up in the northeast Pennsylvania countryside as the second of four daughters. She received a bachelor's degree from Williams College and a master's from the Center for the Study of Children's Literature at Simmons College, and she has worked as a dog runner, a packer in a candy factory, an editorial assistant, a legal assistant, and a freelance writer. She has lived in many places (including Sydney, New York City, Boston, London, Austin, and Jacksonville, Florida), and she currently lives in the Boston area. Graceling, her first book, was an ALA Best Book for Young Adults. Fire is her second book.