Happy Wednesday y’all! This week I’m eagerly waiting on Flamefall by Rosaria Munda. I adored the first book in this series, devouring it in 24 hours. The world building, the dragons, the romance, the dragons, the politics, and oh did I mention THE DRAGONS?! are amazing! I couldn’t get enough of the world. I’ve already pre-ordered my copy (which I don’t do for many books any more). If you enjoy fantasy with political intrigue and a Roman flare, do yourself a favor and get this one. 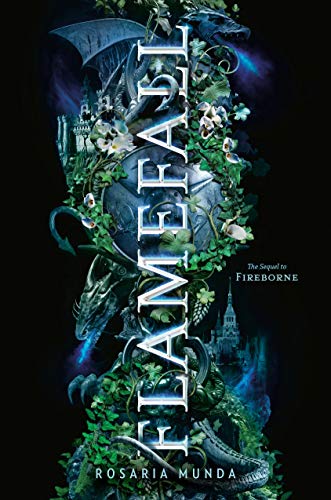 Revolutionary flames ignite around Annie, Lee, and a brand new POV character in the second book of the Fireborne trilogy.

After fleeing the revolution and settling into the craggy cliffs of New Pythos, the Dragonlords are eager to punish their usurpers--and reclaim their city. Their first order of business was destroying the Callipolan food supply. Now they're coming for the Dragonriders.

Annie is Callipolis's new Firstrider, and while her goal has always been to protect the people, being the government's enforcer has turned her into public enemy number one.

Lee struggles to find his place after killing kin to prove himself to a leader who betrayed him. He can support Annie and the other Guardians . . . or join the radicals who look to topple the new regime.

Griff, a lowborn dragonrider who serves New Pythos, knows he has no future. And now that Julia, the Firstrider who had protected him, is dead, he is called on to sacrifice everything for the lords that oppress his people--or to forge a new path with the Callipolan Firstrider seeking his help.

With famine tearing Callipolis apart and the Pythians determined to take back what they lost, it will be up to Annie, Lee, and Griff to decide what to fight for--and who to love.

Rosaria grew up in rural North Carolina, where she climbed trees, read Harry Potter fanfiction, and taught herself Latin. She studied political theory at Princeton and lives in Chicago with her husband and cat. Her debut young adult fantasy novel, Fireborne, will be released by G. P. Putnam’s Sons in October 2019.