You all know I’m a huge fan of dystopian and science fiction. Add in a kick-butt female and I’m sold! Ciara Knight‘s Escapement promises to be just that and more. Plus….it’s FREE!!! Check it out 😀

Ten years after the great war of 2185 the queen’s reign is threatened by uprisings and fear. In celebration of my sixteenth birthday it is my duty as princess to sacrifice a slave to be initiated into the ruling council, solidifying my mother’s empire. When my own erratic powers surface I’m captured and tried for treason. Slaves hate me, my mother wants me executed, and my only chance of survival rests in the hands of a young man, Ryder Arteres, whose sister I sentenced to death.

The door swung open and four guards entered before Dred stormed in. “Malvak orders ya all to the platform now.”

My stomach flopped. “No. It hasn’t been an hour.”

“They be ordered to watch.”

Dred’s words stung like a laser through my heart. “No, please. You can’t. It’s too soon.”

Ryder still clutched one arm and wouldn’t let me go. “Semara, listen to me.”

“No, I won’t. This isn’t going to happen. I’ll tell Malvak who I am and order your release.”

“Not wise.” Dred shoved the key into Ryder’s cell door.

I had to do something, anything to stop this.

“We need you, Semara. You’re the only one left in this war-torn world who can protect Raeth. Please, I promised my folks before they were murdered I’d take care of her. Once I’m gone—”

“Don’t say that.” Tears stung my eyes and I wanted to pull him against me and disappear.

Ryder reached through the bars and held the back of my head so our foreheads touched. “Once I’m gone, you are her only family.”

The guards rushed into the cell, bound Ryder’s wrists, and dragged him from the cell. One guard grabbed Raeth by the arm and did the same to me. Dred stood at the outside of my cell, door open, waiting for me to exit.

“I did all I could,” Dred said with a heavy, deep tone. He bound my wrists and stepped back. “Sorry, Malvak ordered—”

“You could do more. Trust me, you’ll regret this later. You’ll go to sleep each night with Ryder’s face haunting your dreams. I’m still tortured by making a wrong choice when I was only twelve.”

I shoved past him and went out to the center of town. Acid rose in my throat at the sight of the noose hanging from a wood beam. It had to be wood. If it had been metal, I could’ve melted it and bought some more time.

Maybe I could try Ryder’s plan and incapacitate Dred before he stopped me, then get his gun and take a few down. If we could find cover and some metal we’d have a chance.

I watched Dred out of the corner of my eye as we approached the platform.

“Don’t try it, pretty face. I’ve trained for years to be a faster draw with me powers. Ya don’t stand a chance. All you’ll accomplish is ya own death.”

I lifted my chin, determined to fight. “I can’t stand by and watch him die.”

“Ya don’t have a choice. None of us do,” Dred insisted.

“You do. Let me use my powers and the three of us escape. Otherwise, you’ll have innocent blood on your hands.” I pleaded.

Wind whipped through the village. Creaks echoed from the skywalks. Water swished through the steel waterways above. Cannons and barbed wire lined an exterior wall. It was a fortress.

Mother had been right to fear them. Even if I freed Ryder, how could we get out? I suspected the walls were electrified. Maybe I could short out the wires, but I’d need Raeth’s help to demolish the wall.

Even if we managed to break through the wall, then what? We’d have to get a ship and figure out where we were.

There had to be a way to save him. I had to be missing something.

A horn sounded and people came out of homes and buildings, flooding the street to watch Ryder’s execution. Didn’t they see they were no better than the council?

I wrung my hands and pulled at my rope bindings that rubbed my skin raw.

The smell of animals and desert sand carried on the wind.

A tall man appeared on one of the skywalks with a fluffy cape of animal fur lining his huge frame. I couldn’t make out his features, but he definitely had a tattoo running across his forehead. A reflection of sunlight off his face indicated some piercings.

“This here Neumarian is charged with bringing the council’s wrath to our land. Do we wish to sacrifice our way of life and be enslaved to the council?”

“No,” the crowd yelled back as if in a trance.

“Terminate the prisoner and send his body as a gift to the queen.”

“No!” I cried out and ran for the platform. “You’re wrong. We only wish to go in peace. The queen doesn’t know we’re here. We brought a gift!”

I ran up the steps, but a guard snagged my hair, knocking me down so hard the wood cracked against my shoulder. A pain shot down my arm. Ryder shouldered the man and raced to my side. “Semara, please, don’t do this.”

“I can’t watch you die,” I managed through sobs.

The guards tore us apart and placed Ryder on top of a box.

I fought with all my strength and drew heat from my core to my hands, but the mind splitting pain made me collapse. I lay on the floor of the platform forced to watch the noose being secured around his neck.

“Proceed with the execution.”

The guard kicked the box out from under Ryder and the rope snapped tight around his throat.

Ciara Knight writes with a ‘Little Edge and a Lot of Heart’ with her contemporary and paranormal romance books. Her most recent #1 Amazon bestselling series, Sweetwater County, has topped the charts and received acclaimed reviews. Her international best-seller, Pendulum scored 4 stars from RT Book Reviews, accolades from InD’Tale Magazine and Night Owl Top Pick. Her young adult paranormal series, Battle for Souls, received 5 stars from Paranormal Romance Guild and Night Owl’s Top Pick, among other praises. 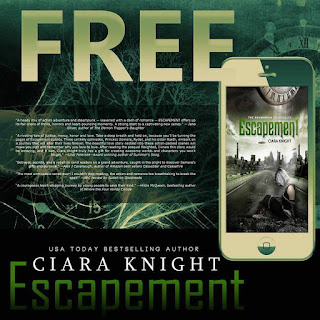 Review: In All My Wishes by Ciara Knight

Review: In All My Life by Ciara Knight #TBRChallenge

Blog Tour: In All My Years by Ciara Knight