I’ve fallen hard for an alien, but he’s harboring secrets.
Massive secrets that threaten the very essence of humanity.
How can I give him my heart when his race plans on taking my future?

Sadie Owens has been slowly dying inside. Bit by bit, piece by piece, day by day. Trapped in a life she hates, she relies on only one person—herself.

Despised by her family and betrayed by an unscrupulous government, Sadie dreams of a different life. When she is chosen to participate in the government’s new social experiment, she is ecstatic at the prospect of spending six months in Thalassic City, the shiny new city under the sea.

Immediately drawn to Logan Chandler, Sadie is captivated by the beautiful boy with the ocean-blue eyes. Logan seems to embody everything that has been forbidden, but he isn’t all he appears to be.

Confused over Logan’s true intentions and concerned when best friend Jenna starts transforming in front of her eyes, Sadie partners with newcomer Jarod in a bid to uncover the government’s real agenda. The truth is more shocking than anything she could ever have imagined.

When Sadie finally understands why the Saven walk among us, will it be too late to save her heart and the human race? 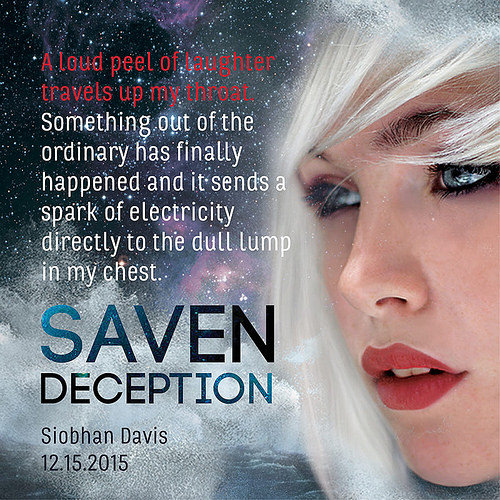 Ok…so…umm…yeah. I’m not really sure where to start! My initial reaction to the newest book from Siobhan Davis has no name. I honestly can’t even begin to describe my reaction reading this book. Saven: Deception begins strong. There’s an alien abduction, lots of dystopian world-building, and again ALIENS! So my initial thoughts were AWESOME, but then I’m not really sure what happened in the middle. It was like the book went from this epic, sci-fi dystopian to angsty teenage romance (do you see my eyes rolling?!). I don’t do angsty teen romance. It’s just not my thing. BUT then the ending redeemed the book by bringing it back to the epic sci-fi dystopian. So…yeah. I’m not sure how I feel about this book! Let’s break it down, shall we?

The writing. Obviously I’m a fan of Siobhan Davis so maybe I’m a bit biased here but she is an excellent author. She can weave a story out of anything and she really brings Sadie to life on the pages. There’s some excellent world-building as we see Sadie’s world through her eyes and her descriptions. Really Davis has given Sadie a wonderful voice which helps when the pace of the story slows down a bit. Sadie’s voice kept me interested. And the foreshadowing!!! Davis is notorious for this. So many hints are given as the story progresses and while Sadie misses them, if you are familiar with the author you’ll pick up on them quickly.

The world building. I love all things dystopian so it is no wonder that I loved this dystopian world as depicted through the eyes of a young teen girl. There is a rough caste-like system in place and Sadie lives in the outer circle, meaning she is a part of the poor/worker part of the society. There are strict rules to help contain the population (i.e. only 10% allowed to marry, mandatory sterilization after a certain age, etc.). The outer circles barely make ends meet and work pretty much from dawn to dusk while the inner circles reap the rewards and have no restrictions.

The Experimento. So this was really cool and the staging for the plot of the story. The Experimento is the government’s “answer” to overpopulation. They have built a city under the sea and take so many volunteers (by random lottery of those that applied) to live in the city for 6 months. During those months, all class restrictions are removed and the characters basically get a taste of what the upper class has always had available. Of course there is ulterior motives to this and an underground rebellion trying to thwart the government so my love for dystopians is really found here 😀

Jarod. Ok so I’m probably not supposed to like this character as much as I did but honestly I love him! Let me try to explain without spoilers. Jarod is one of the boys that joins Sadie in the Experimento. He’s secretive, an instant friend to Sadie, and by all means has the whole boy-next-door thing going for him. It’s easy for Sadie to relate to him as they both come from the same social circle and she finds herself trusting him when she is leery of other.

The romance. It was SO cheesy and cliché at times that I found myself constantly rolling my eyes. Logan is of course super-model handsome and in the upper class while Sadie has exotic beauty and in the lowest class. She’s just drawn to him and moons over him every chance she gets. There’s these weird scenes where she just finds herself staring at him through a window, like she’s drawn to him. I get that it is supposed to be a part of the whole alien-love connection thing but it’s a bit much to swallow. Too much insta-love…or rather lust for me.

The teen angst….I get that there needs to be some, but honestly I could have done without. There were whole sections where Sadie mooned over Logan, where she was angry with him, where she wanted answers, where she didn’t want to talk to him (are you getting the picture?). She was a bit TOO obsessed with him.

The pace. As I stated earlier, the story started strong with a fast pace, but once Sadie enters the training facility, I felt like the story dragged. If it wasn’t for the fact that I was already invested in the story, I may not have bothered to finish it. It wasn’t until 75% into the book that the pace picked back up. I was a little surprised by this as Davis usually writes a fast-paced story, but I found the whole romance and mystery surrounding Logan to be a bit drawn-out. There were several instances where Logan talks to Sadie and says he’ll tell her the truth but then doesn’t. As the reader we already know the truth (as it is stated in the synopsis) but Sadie doesn’t and this becomes a bit tedious.

The secondary characters. I honestly couldn’t tell you much about any of the other characters, even Sadie’s supposed best friend and roommate. These characters were 2-dimensional and really didn’t add much to the story other than to have someone for Sadie to talk to when she wasn’t swooning over Logan.

Overall the last 25% saved the book for me. I liked the big reveal, the rebellion, the beginnings of a relationship with Logan, and the ending. I’m honestly excited to see where Siobhan Davis takes the series next! I do hope that there is more character-building on the side characters and I want to know more about the whole alien connection. If you enjoy scifi, alien romance, or you’re looking for fun read for your weekend, this is the book for you.

You can find Saven: Deception on Goodreads 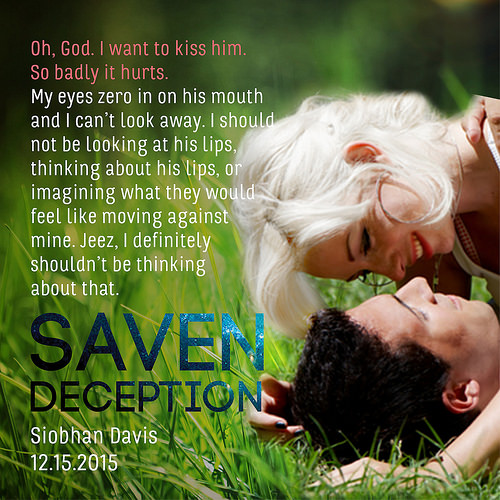 Wide, keen, blue eyes, the color of the ocean, lock on mine, and I forget how to breathe. He’s tall with fair skin and sleek jet-black hair that falls in waves over his forehead into his eyes. His expressive mouth parts gently as he notices me staring, and his lips curve upward.

I know I should look away but I can’t.

It’s as if my eyes are superglued to him.

He is easily the most gorgeous guy I’ve ever seen. Like. Ever. He redefines “hot.” They should just list his name underneath. No further explanation needed. He’s totally all that and more.

Broad shoulders fit snugly under his white shirt, and taut muscles flex in his arm as he grips a tray. He’s not a muscle-bound freak though, thank God. I don’t like that “I have boulders in my biceps” look that a lot of guys seem to favor these days.

Although, it’s not surprising really. Being in peak physical shape is important—the healthier we are, the longer we can work—so the government permits daily gym sessions. Every factory has a state of the art gym outfitted with the latest equipment. The guys in Medi-Tech are addicted to training, and they never miss their scheduled hour. Me? I indulge on the odd occasion, but I’m not a physical kind of girl. Being slight, I’m afraid to develop muscles, in case I topple over on myself.

I shift from foot to foot and side to side, angling for a look at his lower half. But the girl in front is an impenetrable barrier to my ogling. I pout in frustration. Our eyes meet again and now he’s staring at me strangely, a mix of awe, fear, and disbelief blazing in his eyes.

I’m instantly self-conscious, and heat lands with embarrassing transparency on my face. I want to look away but I’m transfixed. It’s as if he’s cast a spell on me. He winks and I practically expire on the spot.

USA Today bestselling author Siobhan Davis writes emotionally intense young adult and new adult fiction with swoon-worthy romance, complex characters, and tons of unexpected plot twists and turns that will have you flipping the pages beyond bedtime! She is the author of the international bestselling True Calling, Saven, and Kennedy Boys series.

Siobhan’s family will tell you she’s a little bit obsessive when it comes to reading and writing, and they aren’t wrong. She can rarely be found without her trusty Kindle, a paperback book, or her laptop somewhere close at hand.

Prior to becoming a full-time writer, Siobhan forged a successful corporate career in human resource management.

She resides in the Garden County of Ireland with her husband and two sons. 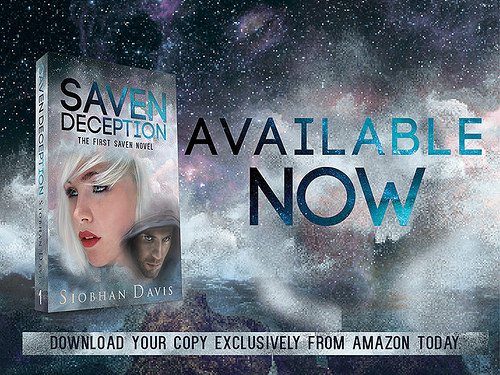 There is a tour wide giveaway for the book blitz of Saven: Deception. Below are the prizes the author is giving away:
– a 10$ amazon gift card
– 3 e-copies of Saven Deception by Siobhan Davis

For a chance to win, enter the rafflecopter below:
a Rafflecopter giveaway

Review: In All My Wishes by Ciara Knight

I Know a Wee Piggy by Kim Norman

One response to “Blog Tour: Saven Deception by Siobhan Davis”