Happy Wednesday y’all! This week I’m eagerly waiting on The Color of Dragons by R.A. Salvatore, Erika Lewis. A pre-Arthurian tale of magic and dragons, this book promises all of my favorite fantasy things in the blurb. Plus that cover is so pretty, and y’all know I’m a sucker for pretty covers 😉 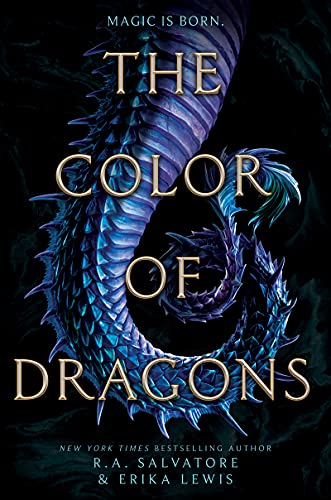 Powerhouse adult fantasy author R. A. Salvatore and Erika Lewis deliver a sweeping, action-packed, romantic pre-Arthurian tale of the origins of magic (and Merlin), perfect for fans of Falling Kingdoms and Seraphina.

And Maggie’s powers are especially fickle. With no one to help her learn to control her magic, the life debt that she owes stretches eternally over her head, with no way to repay it.

Until she meets Griffin, the king’s champion, infamous for hunting down the draignochs that plague their kingdom.

Neither has any idea of the destiny that they both carry, or that their meeting will set off a chain of events that will alter every aspect of the life they know—and all of history thereafter.

This epic, romantic tale will enchant readers and draw them into a thrilling world of star-crossed lovers, magic, destiny, and the paths we choose.

Erika Lewis grew up in Alexandria, Virginia, spent summers with her grandparents in Worcester, Massachusetts, and currently lives in Los Angeles, California. With a passion for storytelling set in magical places, she spends as much time as she can traveling. When she’s not writing, she can generally be found scribbling notes in a blank book while wandering through abandoned buildings, all kinds of museums, and graveyards.

A graduate of Vanderbilt University, her list of credits straddles the comics and novel space, including Game of Shadows from Macmillan’s Tor Books, Firebrand and Acursian from Legendary Comics, #Guardian from Awesome Media & Entertainment, and The 49th Key from Heavy Metal Publishing. The Color of Dragons is her debut YA, coming from HarperTeen October 19th, 2021, and Kelcie Murphy and The Academy for the Unbreakable Arts is her middle grade debut coming from Starscape/Macmillan March 1st, 2022.

A lifelong resident of Massachusetts, R.A. Salvatore, began writing shortly after receiving his Bachelor of Science degree in Communications/Media from Fitchburg State College. He penned his first manuscript in 1982, in a spiral notebook, writing by candlelight while listening to Fleetwood Mac’s Tusk album.

Bob’s first published novel, "The Crystal Shard", was released in February of 1988. By 1990 his third book, "The Halfling’s Gem", had made the New York Times bestseller list.

Salvatore spends a good deal of time speaking to schools and library groups, encouraging people, particularly young people, to read. With the zeal of a religious convert, he talks about the virtues of reading and the ultimate appeal, “it is fun.” He remembers his return to reading when he was in college, “The blizzard of 1978 shut down my college for a week. My sister had given me a copy of J.R.R. Tolkien’s The Hobbit, which I read while house-bound. When I got back to school, I changed my major from math to communications.”

Salvatore makes his home in Massachusetts, with his wife, Diane and their two dogs, Ivan and Dexter. He spends his “free time” coaching and playing softball on a team made up of family and close friends. His gaming group still meets on Sunday nights to play games. Of late, they have been playing the new game R.A.designed with Bryan Salvatore and Geno Salvatore, "DemonWars: Reformation", a role-playing game set in the World of Corona.

He is currently working on more novels set in Corona for his DemonWars series.

Release Blitz: Christmas with an Angel by Debbie Mason