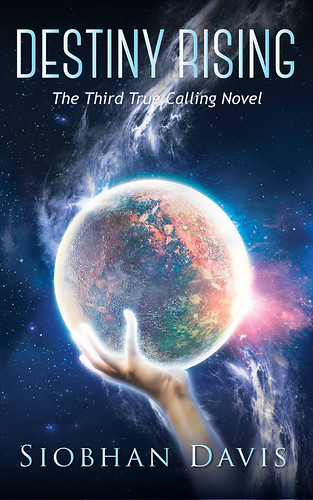 Blurb:
Every choice has a consequence.

Once again, the world is on the brink of momentous change. As revolutionary organization Saoirse prepares to battle the government for control of Earth and Novo, Ariana and those she loves must join humanity’s fight for justice and freedom.

Torn in one direction by her unique connection to childhood sweetheart Zane, and pulled in the other by a relentless passion for her fiery fiancé Cal, she must make the hardest decision of all. While embarking on a road to self-discovery, her psychic gift evolves and the full extent of her powerful ability is revealed.

Then fate lands another savage blow and she faces the most horrific choice of all. Forced into striking a deal with the enemy, she must make the ultimate personal sacrifice or risk everything she holds dear.

When destiny finally rears its head, what will the future hold?

You can find Destiny Rising on Goodreads

Start the series for free!

Blurb:
Planet Novo, nestled in space twelve hundred miles above the surface of the Earth, is the new home of 17-year-old Cadet Ariana Skyee. Confused by the government-sanctioned memory erase and distressed at her impending forced marriage and motherhood, Ariana’s plans for the future are thrown into complete disarray.

As the traumatic events within her family life enfold, Ariana grows increasingly alarmed at the authorities apparent pre-occupation with her and feels progressively more isolated and alone.

Her growing feelings for fellow Cadet Cal Remus intensify as the recently announced pageant, ‘The Calling’, gets underway. Struggling to comprehend the continuous, inexplicable dreams of the mysterious Zane, discovering the past helps shape her future, with devastating personal consequences.

You can find True Calling on Goodreads

About the Author:
Siobhan Davis is the author of YA science fiction romance series True Calling.
A self-diagnosed ‘teenager forever’—at least when it comes to books, music and movies; Siobhan is totally addicted to teen fiction and superhero/blockbuster movies. Siobhan loves baking, crime novels, shoes, bags, make-up, anti-wrinkle cream, anything pink, Kelly Clarkson, Katy Perry, and Robert Pattinson (definitely Team Edward).
Siobhan has forged a successful corporate career, in Human Resources, over the last twenty years.
A member of the IWI writers group, Siobhan resides in the Garden County of Ireland with her husband and two sons.
Contact Siobhan at: www.siobhandavis.com

Every color imaginable floats in front of my eyes. Temporary whiplash sets in as my head jerks back and forth, surveying the myriad of different fish swimming freely outside the glass window of the observation deck. It’s a pretty cool hiding place. Soothing in its own way. Well, as soothing as anything could be considering my current predicament.

Mercifully, I’ve been left undisturbed for the last hour.

Undisturbed by other humans that is.

My thoughts; however, are entirely another matter.

Severely disturbed is more akin to how I feel at the swarm of memories that are presently darting through my mind.

I can barely recall our arrival in Saoirse’s underwater military Command Center. It hadn’t actually taken that long to travel here even though we are thousands of miles out at sea and scraping the bottom of the ocean floor. That’s the beauty of the Velo network, I suppose. Designed specifically as a high-velocity transportation system, it can travel at the speed of light. Okay, so I made that last bit up but it’s probably not far from the truth.

Vaguely remembering Cal going to sort out our accommodation, I had taken flight at the first opportunity. I’d kind of wandered aimlessly for a while until I stumbled into the main lobby area. Levels stretched upwards as far as I could see. Curious to discover what was at the top, I’d hopped in the elevator and ended up here.

The observation deck reminds me a little of the Empire States Building or the Rockefellar Center. Without all the buildings and the crowds. The view is still spectacular though.

Scooting forward on my knees, I press my nose to the glass and stare at the multi-colored fish as they dance on by. The water outside is eerily calm and there’s barely a ripple.

The one observation I’ve made so far about our new home is how weird it smells. If I was standing at the top of the Empire States Building now, I’d inhale the fresh minty air and feel the sting on my cheeks as wind whistled by, whipping my hair around my face. There’s nothing here but a sterile, clinical type odor that reminds me of a hospital ward, or the whiff you get when you sit in a brand new car for the first time. I wiggle my nose and my nostrils itch aggravatingly. I hope I’m not allergic.

Approaching footsteps break my reverie and my heart rate rockets when I sense who it is.

There’s no hiding from him.

Not now. Not ever.

“I’ve been looking for you everywhere.”

Glancing up, I automatically sweep him from head to toe. Sculptured jawline, check. Sparkling blue eyes, double check. Defined chest and abs, oh, yeah. Before I can continue my ogling, he drops to his knees beside me. My body is still pressed into the glass, but he gently tugs on my shoulders, easing me back. Twisting around, he snags me onto his lap.

My eyes are still latched onto his and I know I need to stop staring. But I can’t force myself to look away, almost like it’s an inhuman feat I’m incapable of achieving. “I feel like man-candy.” Cal smirks.

I snort in a most unattractive manner. “I can easily get behind that,” I say, visualizing getting all up in his personal space. Yeah, my mind is still in the gutter, though I’m totally blaming my pregnancy hormones for that.

Threading his fingers in mine, Cal stares at me pensively. “Talk to me. What’s going on?” Panic builds in my chest and I avert my eyes.

“Nothing much,” I mutter, focusing on my feet. I won’t lie to his face.

Even though he’s kind-of hit the nail on the head, there’s no way I’m admitting to that right now. Not until I’ve spoken to Zane about the horrific memory that’s hijacked my mind and threatened my sanity. Though I’m unsure if I’ll ever get to do that, for we’ve been separated again and this time I fear there’s no returning from it.

Please note that this excerpt is unedited and the final published version will be slightly modified.

More sample chapters, quotes, reviews and book excerpts are all available to download from the authors website

There is a cover reveal wide giveaway for the cover reveal of Destiny Rising. These are the prizes you can win:
– e-copies of the whole True calling series by Siobhan Davis. Which is the following books: True Calling, Lovestruck, Beyond Reach, Light of a Thousand Stars and Destiny Rising.
– one 10$ amazon gift card

For a chance to win, enter the rafflecopter below:
a Rafflecopter giveaway

Waiting on Wednesday #51 – Frost Like Night by Sara Raasch

Review: My Soul to Keep by Sean Hayden